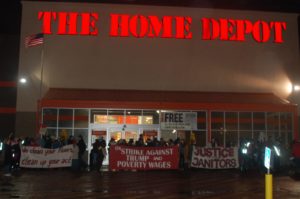 “We are trying to put a stop to the poverty wages…Donald Trump, he supports these low wages and he has said that he doesn’t think workers deserve better wages,” Luciano Balbuena,CTUL member and striking retail janitor, quoted in the New York Times this morning.

Check out this interview by Sarah Jaffe of CTUL member Luciano Balbuena and CTUL Co-Director Veronica Mendez Moore. The transcript of this interview has been covered by Bill Moyers, In These Times, TruthOut, and The Baffler

“Immigrant Workers Are Already Fighting Back Against Trump,” Michelle Chen, The Nation, January 23, 2017

Hours before Donald Trump’s Inauguration as the 45th President of the United States, retail janitors organizing with CTUL who are contracted to clean more than a dozen Home Depot and other stores in the Twin Cities went out on strike against their cleaning contractor to protest their poverty wages and Donald Trump’s anti-worker agenda – the first strike against Donald Trump in the country since his election. The workers and supporters numbered hundreds as they picketed outside of the Home Depot at the Quarry in Northeast Minneapolis, chanting and holding a giant banner that says “On Strike Against Trump and Poverty Wages.”