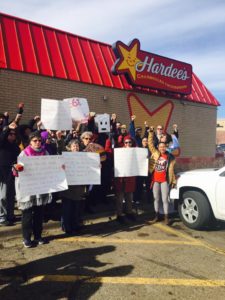 When we fight, we win!

Feb. 15, 2017. In the face of overwhelming odds, low-wage worker leaders with CTUL are standing up and winning real change.

On Monday CTUL fast food worker members protested outside of Hardees in St. Paul as part of a nationwide fast food worker-led action to say No to Andrew Puzder (CEO of Hardees) for U.S. Department of Labor Secretary. This morning Puzder’s nomination was withdrawn.

One year ago, when asked about wage theft Governor Dayton stated: “It’s the first I’ve heard of that concern…I’d want to talk to Commissioner Ken Peterson (Department of Labor and Industry) to see what his take on it is.” This afternoon, after a series of meetings with CTUL members to learn about the issue over the past few weeks, Lt. Governor Tina Smith stood with State Representatives to introduce a bill aimed at cracking down on wage theft.

This is just the beginning. On March 12, 2017 CTUL will launch our Raise Worker Voice Campaign, with the goal of taking our organizing efforts to scale and winning a voice with tens of thousands of workers across Minnesota.