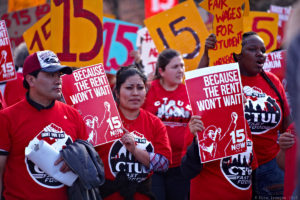 May 1st is International Workers’ Day, commemorating the Haymarket affair and immigrant workers’ fight for an eight-hour workday in the 1880s. This year immigrant workers across the country are calling for a General Strike on May 1st, including no work, no school, and no shopping. In the Twin Cities, workers will be striking to fight against the racist and anti-immigrant policies of the Trump administration, and to demand respect on the job, $15 an hour, and the right to organize without fear of retaliation.

9:30-10:30am, Retail Janitors Strike, Outside of the Home Depot in The Quarry, 1520 New Brighton Blvd, Minneapolis

This action will launch International Workers Day and A Day Without an Immigrant in the Twin Cities. Retail janitors organizing with CTUL will be going on strike to demand an end to wage theft in their industry and are fighting for $15 and a voice on the job. Other retail janitorial companies have improved wages and other work standards including the right to form a union without fear of retaliation, but Kimco (which cleans Home Depot and other stores in the metro area), Capital, and Diversified refuse to meet those basic standards.

The march will start at 4pm, including stops at Franklin Street Bakery where workers are organizing for better wages and the right to form a union, Wendy’s on Franklin Ave as part of the Fight for $15 and union rights with fast food workers, U.S. Bank with the Minneapolis and St. Paul Teachers Unions, and end in Downtown Minneapolis to send a message to City Council that all workers in Minneapolis need a $15 minimum wage.