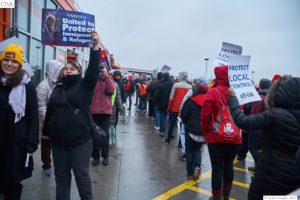 CTUL members cited in New York Times article: “On May Day, Protesters Take to the Streets Nationwide,” Jennifer Medina and Vivian Yee, May 1, 2017.

Click here for all of the press coverage of the day

9:30-10:30am Picket with Striking Retail Janitors outside of Home Depot

Hundreds of striking workers and community allies came out for the first action of the day outside of the Home Depot in Northeast Minneapolis. Subcontracted retail janitors who clean stores like Home Depot and Herberger’s are on strike to protest degrading working conditions and poverty wages and to demand $15 and the right to form a union without fear of retaliation. They stand together with millions of workers all across the country who are out in the streets to demand respect and dignity in their workplaces and to protest the anti-worker and anti-immigrant policies of the Trump administration.

At the picket, retail janitors announced that they will be going to Atlanta to attend Home Depot’s Shareholder meeting on May 18 to educate shareholders on the poor working conditions in the cleaning of their stores. 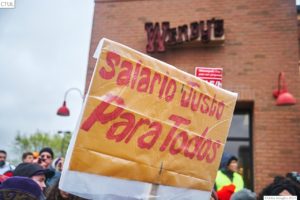 Over 1,000 people marched in the International Workers’ Day March, including striking fast food workers, retail janitors and construction workers from CTUL. The march started in East Phillips Park, marched past Franklin Street Bakery where workers are organizing for fair wages and the fight to form a union without fear of retaliation, and past Wendy’s where workers are part of the Fight for $15. 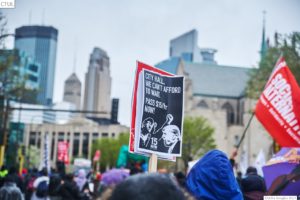 We ended in Downtown Minneapolis, meeting the Minneapolis and St. Paul Teachers Unions, and ending with a call on City Hall for a $15 minimum wage in Minneapolis for all workers. 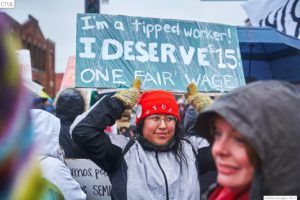