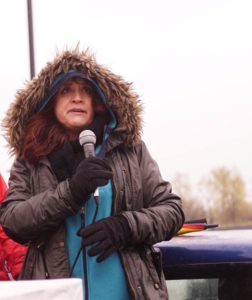 My name is Elizabeth Mejia Campillo and I work for Kimco Services as a retail janitor cleaning a Home Depot and a Kohl’s in the Twin Cities. At Kimco, we have repeatedly asked for raises and have not received them. We don’t have access to any benefits such as paid sick days or vacation time. Many of my co-workers are losing hours as Kimco continues to make us do the same work in less and less time. As the head of my household, I need to work two jobs in order to pay our mortgage, bills, and other expenses. I support my daughter while she studies in college and my 70 year old mother who still works part time only to pay her medical expenses.

I have been organizing with my co-workers to change this reality. If Kimco was a responsible contractor who paid fair wages and benefits, I’d be less stressed financially. I would be able to pay my mortgage every month without worrying about getting kicked out if my hours get cut. I would be able to spend more quality time with my mother and daughter if I worked one job and had time off. Kimco doesn’t understand my reality or listen to us. When my coworkers and I went on strike, they gave me a warning for missing work, which would be violating my rights. Since then they have erased the warning, but only because we spoke up and demanded that they respect our rights as workers.

This is why I’ve decided to attend the Home Depot Shareholder’s Meeting on May, 18th. My co-workers and I hope to educate Home Depot and their shareholders about the problems we are facing as janitors who keep their stores clean.

We also hope to address the public support that the Home Depot founders have given to Donald Trump. Trump’s agenda has been very anti-immigrant and anti-woman, which I feel is a direct attack on my family. My household includes three generations of women who have faced violence. I myself have suffered an assault. My brother was kidnapped and murdered in Mexico and to escape more violence my mother and daughter decided to leave their home and come live with me. We don’t deserve degrading comments or blame, we demand respect.

As a woman and immigrant who works hard to ensure the Home Depot store that I clean is always presentable for customers, I feel that President Trump’s policies and words are an attack on my family and no Home Depot investor should be supportive of those attacks. Myself, my mother, and my daughter have lived through hardship and loss but are strong together, continuing to fight and standing up for what we know we deserve. I go to the Home Depot shareholder’s meeting to represent my co-workers at Kimco, immigrants, women, and all of us who demand better from our employers and our country.