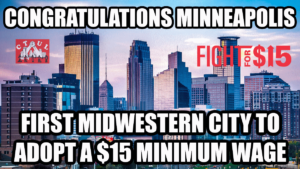 On Friday, June 30th, 2017, the Minneapolis City Council voted 11 – 1 to pass a $15 minimum wage. This historic vote comes on the eve of CTUL’s 10 year anniversary and  and years of work with many other organizations fighting to win. CTUL members have organized to change the conversation and the reality for low wage workers over the last 10 years in the Twin Cities.

Beginning January 1st, 2018, the minimum wage will increase to $10.00 and continue to rise until July 1st, 2022, when all workers in Minneapolis will be paid a living wage for large businesses of 100 employees or more. For small businesses with less than 100 employees, the first increase will be to $10.25 on July 1st, 2018 and continue to rise until $15.00 is reached on July 1st, 2024. This increase in the minimum wage will provide a raise to over 71,000 people who work in Minneapolis, a disproportionate amount of whom are people of color and single mothers. Now CTUL members and our allies will work to expand on this victory, fighting for $15 in St. Paul and other Minnesota cities, and building a strategic enforcement model that empowers workers to defend our newly won workplace rights. 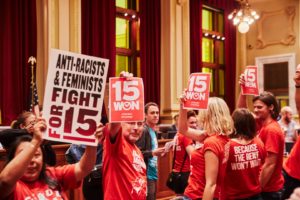 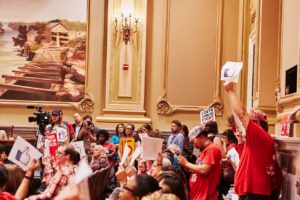 CTUL has worked with allies at many organizations including 15 NOW, Working America, ROC, MN Nurses Association, UFCW 653, SEIU and countless others to make this a reality. But, the initial push to open the space to dream about this ordinance came from low-wage workers across the city who courageously and relentlessly have been organizing to make a difference on the job and in their lives.

”The passage of $15  is a victory for workers everywhere! Fast food workers across the country inspired us to fight. Here in Minneapolis, we organized with CTUL and other partner  organizations to do what many people thought was impossible. Along the way, I was nervous. People said we were crazy and that we would never win. Just 2 years ago the city council didn’t even want to take up the issue. But look where we are now! After half a dozen strikes, protests, talking with elected officials, our struggle has become our victory. Now, we can give our children the things they need. We can buy them healthy food and give them a quality education. Thank you to all my brothers and sisters in this struggle. We won $15!! If we did it, you can do it too! ,” said Carmela Palacios, a Burger King employee and member of CTUL. 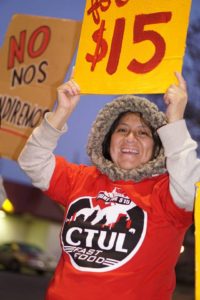 Low-wage workers across the Twin Cities have been organizing with CTUL, leading a series of strikes over the past three years to demand living wages, benefits like earned sick and safe time (which went into effect on July 1st, 2017 in Minneapolis and St. Paul), and respect and dignity in their workplaces. This leadership allowed for dialogue to be opened in between the workers most directly impacted by this issue and elected officials with the power to change it.

“We’ve been organizing for this victory for three years and it makes me soo happy that today the City Council has finally taken a vote to raise the minimum wage. Although we faced many obstacles in this fight, we didn’t give up. We kept organizing with our co-workers, going on strike, going to shareholders meetings, and showing up to let our elected officials know that we have been fighting for this because we need it. I am very happy today.”  Guillermo Lindsay, CTUL member and fast food worker. 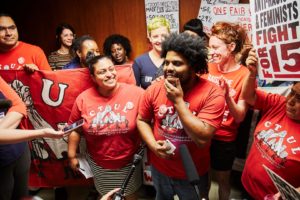 We are very proud of this victory! This is a testament to our base that when we organize, we win! This would not have been possible without the leadership of workers impacted by this very issue, and without the broader coalition of amazing organizations in the Twin Cities. All of the strikes, rallies, and risks are paying off so we will continue to fight until we have an economy that works for all of us and not just a few wealthy CEOs. This includes leading ongoing workplace fights for fair wages and working conditions, fighting for $15 in St. Paul and other surrounding cities, and organizing for strategic enforcement that empowers workers to defend our rights in the workplace.

Click here to donate to support the ongoing struggle!