“'(People) don’t really pay attention when we talk, but with protests for the last week a lot of people have been looking and recording and… you can see they recognize that it’s something we are passionate about,’ says CTUL’s [Cardell] McKizzie. The protests are about ‘getting heard, being seen.'”

“As Veronica Mendez Moore from the Twin Cities Centro De Trabajadores Unidos En Lucha (CTUL) said to me, ‘It’s not about being anti-football. It’s about being against a corporate party that’s extracting from our communities and creating an environment of militarization, while increasing wealth at the top at expense of those at the bottom.’

The Pre-Game: Our Lives Over Their Games – Jan 29 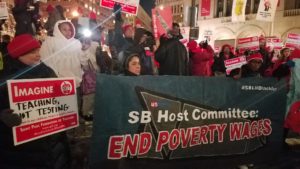 The Week of Action started out powerfully with 500 people marching to the Super Bowl launch party at the Excel Center. Here are some of the highlights of press coverage: 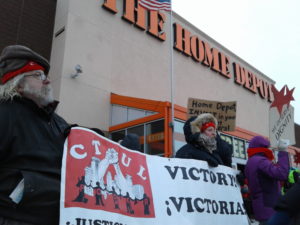 Over 250 people braved the cold in this action with CTUL and Navigate, calling on Home Depot to support a Responsible Contractor Policy in the contracted cleaning of its stores, and to support a clean DACA bill. Check out video footage of the action on WorkDay Minnesota and Unicorn Riot 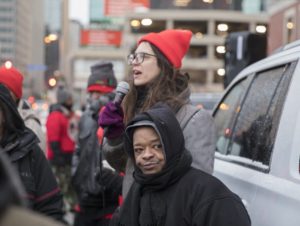 The same corporations that fought to keep thousands of working families in poverty by fighting against Earned Sick & Safe Time and a $15 minimum wage in Minneapolis and St. Paul sponsored an elite $2,500 per table event to honor community service and personal integrity in the NFL. Over 200 workers and community allies showed up to call on the Minnesota Chamber of Commerce and the Super Bowl Host Committee to support $15 in Minneapolis and St. Paul, and support sufficient funding for enforcement. Check out this video by WorkDay Minnesota of the action outside, as well as a video from the action on the inside.