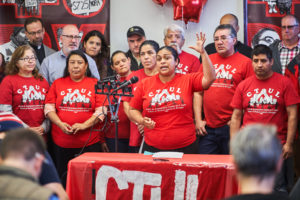 the award in Washington D.C.

We are honored to receive an award given in the memory of Eleanor Roosevelt, a tireless

advocate for the rights of workers, who was one of the driving forces that moved the 1948

Universal Declaration of Human Rights, which declares that “Everyone who works has the

worthy of human dignity.”  Unfortunately, her dream of universal human rights is far from a

reality, and it is up to us to continue the fight.

Over the last decade, CTUL has been fighting to make the Twin Cities metro area a place where

workers can live and work with dignity, a place that’s more equitable and just for everyone,

and where everyone has the opportunity to live their best lives.

However, in today’s economy, the wealthiest 0.1% have placed the burdens and risks of the economy

on poor and marginalized communities. The wealthiest 15 companies in Minnesota have accumulated

over $1 trillion in assets. If one were to take just 10% of that wealth, one could double to wages of

every single minimum wage worker in the state of Minnesota for 20 years.

multi-million dollar projects. While developers walk away with millions in profits, injured workers are

thrown out like old and broken tools. Similar chains of profit at the cost of severe exploitation can be seen

in many other low-wage

industries. Other consequences play out over decades. The constant drip of poverty and exploitation means

When people from marginalized communities begin to view themselves as leaders, and when they make the

connection between their every day working conditions and the 0.1% who run the economy, change is inevitable.

Through the success of the retail janitorial campaign, we estimate that an additional $5.6 million per year is shifted

from the 0.1% and is invested in the poorest communities in the Twin Cities metro area. But this is not enough.

We invite you to join us in continuing the build the legacy of Eleanor Roosevelt, where we all enjoy the right to

basic human dignity. This will not happen without a powerful movement led by marginalized communities that

focuses attention on the 0.1% who drive the economy. We need to demand a place at the table in deciding not just

working conditions, but ultimately in deciding how our economy works.