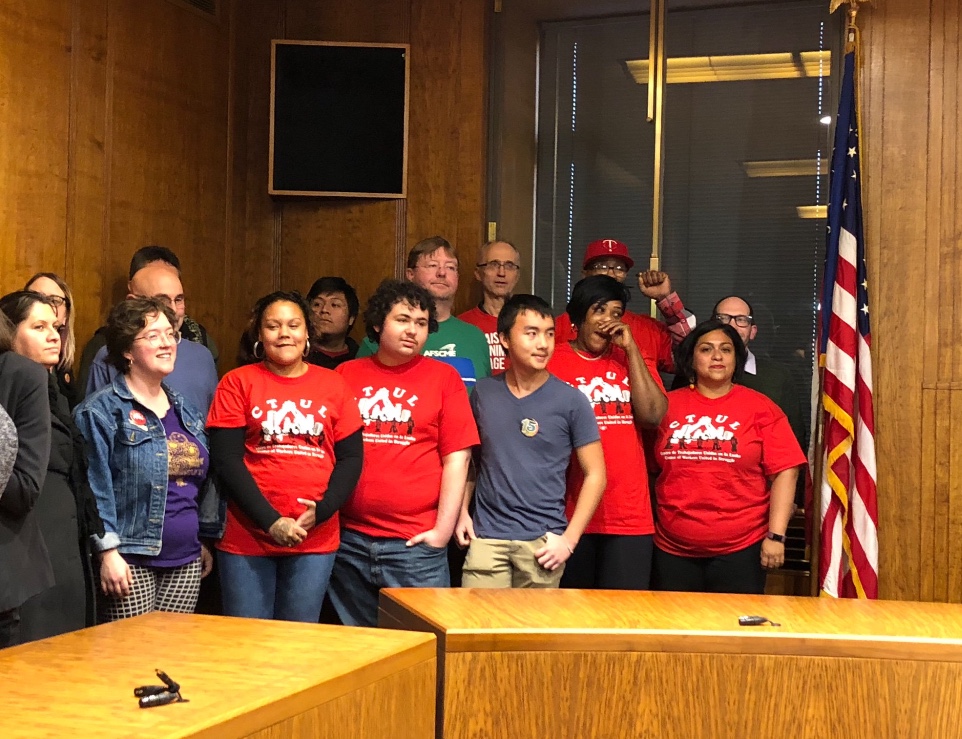 Today we celebrate our victory on passing $15 minimum wage in the City of Saint Paul. This victory was the result of the continued efforts of compassionate, brave, and relentless low wage workers, who believe a better world is at the reach of our hands.

All workers deserve to take care of their needs and enjoy time with their families and the important people in their lives, and because of that, they deserve a living wage. CTUL members and fast-food workers launched this fight in the Twin Cities four years ago, and have been on the front lines taking risks and building power by striking, speak their truth, organizing their co-workers, participating in city committees, and everything in-between to set a new standard in Saint Paul. Every day we are told that we can’t change the world, we are told that we don’t hold power and we can’t win, but today is a different day because through our organizing we made $15 reality!

We are taking this momentum and pushing for more to make St. Paul’s minimum wage the strongest it can be. We commit to spreading through the city to educate workers on their newly won rights and work with the city to develop strong enforcement mechanisms. We also find it troubling that City Council passed a last-minute corporate giveaway by allowing franchises to be classified as small businesses, putting many workers and primarily workers of color on a slow track to $15.

Other cities who have passed $15 like Seattle and Minneapolis classify franchised businesses as large businesses because of the many benefits that they receive from the corporate franchisor that small businesses can’t rely on. Workers deserve to be heard regarding their working conditions at franchises and now that we won $15 we know we can win more. We are committed to working with the City of Saint Paul beginning in January 2019 to ensure the $15 minimum wage has the greatest impact possible.

The workers of Saint Paul achieved a historic victory, and we want to make sure we mention that the ordinance is not exactly what we demanded. However, it is a major win for worker’s rights, and we will continue to build power to make sure we are one step closer to make Saint Paul a more equitable place to live and work. Together, the workers of the Twin Cities decide our future!