Winning a Voice in the Workplace 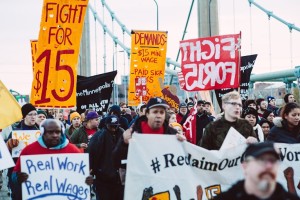 CTUL is breaking new ground in establishing a voice for workers in shaping the workplace policies that shape their lives, as shown by recent headlines like these:

The connection between quiet talks and marching in the streets may not be immediately obvious, but they are both part of CTUL’s strategy of developing low-wage worker leadership and opening lines of communication between workers and corporate and government decision-makers. The existing system is structured to exclude these workers from high-level decision making, and to insulate business and political leaders from understanding the effects their decisions have on low-wage workers’ lives. But after four years of strikes, marches, rallies, and other public awareness-raising, Target leadership agreed in 2014 to meet with the CTUL members who clean their stores overnight. For the first time, Target Corporation leadership felt compelled to listen first-hand to these workers’ stories of wage theft, unsafe conditions, seven-day workweeks, and other workplace rights abuses. This dialogue led to Target’s implementation of a Responsible Contractor Policy designed to curb these abuses and to Target’s continued engagement with CTUL workers and other leaders in the ongoing fight for workers justice, as referenced in the Star Tribune article.

However, the issues raised by the janitors contracted to clean Target stores are not unique. This is made clear in a report released by CTUL today, the product of hundreds of surveys with low-wage workers throughout the Twin Cities:

Confronting Exploitation: The Face of Low-Wage Work in the Twin Cities

This report exposes the rampant wage theft and other abuses experienced by low wage workers. A sample of the shocking contents:

These findings make it clear that workers’ voices are still too often being ignored and silenced, with serious consequences for their well-being and that of their families. And while we at CTUL are excited about the progress represented by Target’s engagement on these issues of worker justice, it is important to remember how we got there: 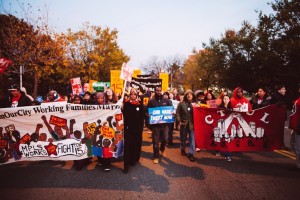 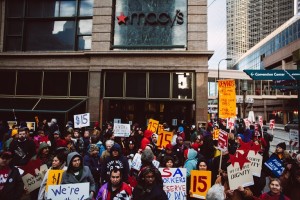 Yesterday’s Reclaim Our City day of action was CTUL’s largest strike to date, with more than 100 fast food and retail cleaning workers joining with hundreds of allies. Their demands echo those that led to the collaboration with Target: fair wages, fair schedules, an end to wage theft, and an ongoing voice in the workplace. When there is no viable channel through which workers can engage with corporate and government decision-makers, CTUL workers and their allies use the tools available to them: striking, marching in the streets, and raising their voices through media and social media until those in power realize we can no longer be ignored. Yesterday’s strike has already sparked new communication between CTUL and two major retailers, as well as renewed support for the workers’ struggle from Minneapolis City Councilmembers and US Representative Keith Ellison. This is how CTUL opens new lines of communication between low-wage workers and the decision-makers whose policies shape workers’ lives. This is how we fight, and this is how we win.

Thank you for your support of the low-wage worker justice movement. The full text of the Confronting Exploitation report is available at the link above, but if you would like a paper copy please reply to this email requesting one.