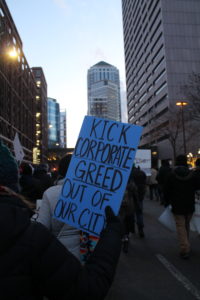 Over the past year, Reuter Walton has been plagued with increasing reports of labor abuses on its construction projects in the Twin Cities, from labor trafficking to child labor to wage theft. CTUL has been at the forefront of a movement together with the West Side Neighborhood Organization (WSCO) calling on the third largest real estate developer in the Twin Cities[1] to take steps to ensure protections of construction workers’ rights.

In a shocking turn of events that shakes up the housing development world in the Twin Cities, the co-founder of Reuter Walton just announced that he was stepping out of the company. According to a recent article, Nick Walton is “selling his stake in the construction business to focus on development and a re-launched property-management business.”[2]

In reference to the increasing reports of labor abuses, Mr. Walton stated, “this has definitely opened my eyes and I have learned a lot about some of the subcontractors in the industry. I was not operationally involved, but I want to make sure all of my development projects are done right and we are clear of these practices going forward” (emphasis ours). Interestingly, Mr. Walton goes on to state that he plans to focus on fair housing by “creating thousands of affordable housing units.”[3]

This is hopeful news, and a huge victory for workers’ rights and the broader community. At the same time, we want to take steps to ensure that Mr. Walton follows through on his commitments and that the leadership that remains at Reuter Walton commit to higher standards as well. In that spirit, we would like to provide a brief history of Reuter Walton’s history regarding these issues, and lay out clear expectations so that we can all can ensure basic labor protections and fair housing moving forward. In addition, CTUL and WSCO are calling on St. Paul City Council to hold a public hearing with the leadership of Reuter Walton to discuss steps they are taking to ensure that there is no labor trafficking or other serious violations of workers’ rights on their projects in St. Paul.

It is no coincidence that this shake up is happening right now. Reuter Walton has faced increasing attention for workers’ rights abuses that have been reported on several of its projects in the Twin Cities, including:

Mr. Walton’s statement about wanting to steer clear of these practices going forward is commendable. To be clear though, the only way to ensure that there is no labor trafficking or other such abuses on construction projects in the Twin Cities is to ensure a mechanism for workers to voice their concerns about wages and working conditions without fear of retaliation. So long as workers are too fearful to be able to voice concerns, these abuses will continue.

Self-monitoring systems instituted by developers cannot do this – there is an inherent conflict of interest in companies prioritizing their profit margins while claiming to self-monitor conditions of the contractors on their projects. Multiple studies have shown that this type of Corporate Social Responsibility model does not work.[7][8] At present the only way to ensure that workers have a voice is through a union or through a Worker-driven Social Responsibility (WSR) model. Unions already have contracts in place that ensure a mechanism for workers to voice their concerns through a grievance procedure. Construction members of CTUL have worked with local and national allies to build out a WSR model in the Twin Cities construction market – Building Dignity and Respect Standards Council (BDC). This model includes several core components to protect worker voice, including:

At a recent community forum, WSCO voted to join CTUL, the Carpenters and the Laborers in calling on the St. Paul City Council to hold a public forum regarding labor standards on Reuter Walton projects in the city.

Reuter Walton has traditionally focused on developing market-rate housing in the Twin Cities metro area. While it is commendable of Mr. Walton to publicly prioritize affordable housing, the current housing crisis requires a fundamental restructuring of housing that addresses predatory landlords, enforcement of housing standards, and truly affordable housing that fits within a working class budget.

The term “affordable housing” is often thrown around loosely, and it does not always mean that housing is actually truly affordable for the most impacted communities. For example, Minneapolis is considering a proposal for an inclusionary zoning policy that calls for new development projects to include 8% of the units affordable at 60% of the Area Median Income (AMI). According to the Twin Cities Met Council, AMI in the Twin Cities metro area is $100,000 / year for a family of four.[9] At 60% AMI, this means that affordability will be defined as $60,000 for a family of four. This is significantly outside of the range of being affordable for CTUL members. In fact, this is nearly three times the pay of a full-time job at the current Minnesota minimum wage of $9.86/hour, ($20,508 / year). To be truly affordable, developers need to look at income levels of people in the neighborhood where they are building new housing in order to ensure that there is an equal percentage of affordability based on income. Within the poorest neighborhoods in the Twin Cities this requires a significant proportion of the housing being affordable at 20-25% of AMI.

Moreover, developers need to take steps to ensure that renters’ rights are protected by ensuring that renters can stand up for their rights without fear of retaliation. In addition to building truly affordable housing, we are calling on Mr. Walton to publicly support: the right for tenants to form unions, the Minneapolis Tenant Opportunity to Purchase Ordinance, and a statewide rent control.

For too long, developers have been allowed to run roughshod through our communities, making promises that they rarely, if ever, fulfill. This has led us to where we are today, with more and more reports of labor abuse, and an ever-growing housing crisis. While we are excited to see that Mr. Walton is responding to community pressure, we cannot take his commitments as a given. We need to ensure accountability to the broader community.

We look forward to hearing from Mr. Walton about the concrete steps he will take to ensure labor protections and affordable housing by empowering workers and renters to stand up for their own rights without fear of retaliation.

[8] “The Problem with Corporate Social Responsibility,” Jennifer Gordon, Professor of Law, Fordham University School of Law, July 11, 2017. You can find a link to the report here: https://wsr-network.org/resource/the-problem-with-corporate-social-responsibility/