The last 2 months have been a very long and hard 2 months. The first half was filled with launching a Week of Action with our allies in Tending the Soil (poor people of color led organizations in the Twin Cities including: CTUL, Inquilinxs Unidxs, Awood Center, Navigate MN, and SEIU Local 26), and building plans to move forward into our long-term vision of taking on the 0.1% who drive the economy to win structural changes that challenge patriarchy, racism and capitalism. In this later area we have begun conversations with staff, board and national organizations about how to restructure CTUL and other workers centers to be best equipped to lead those fights. The last month however, has been a whirlwind of changes we’ve needed to make to respond to the crisis of the Coronavirus and its impacts. We have had to respond to the needs of our communities that are being left out of the policies that governments and corporations are making, and have had to make new policies to protect our staff. We know that CTUL is on the front lines of supporting low wage workers of color during this time and we are doing all we can to respond both to the immediate needs by providing access to information and resources, and to fight for long-term structural changes that get to the root causes of exploitation in our communities. The work is divided into the different priorities that the Board set for 2020: 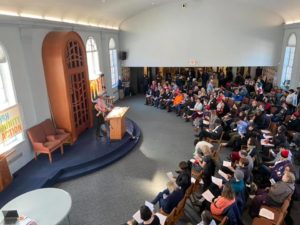 We had a Week of Action led by Tending the Soil, including a weeklong Leadership School discussing the connection between Work, Housing and the Environment. 11 CTUL members participated in Leadership School, and dozens more members participated in several actions throughout the week. The actions resulted in many victories, including St. Paul teachers winning a strike, hospital workers winning access to healthcare benefits, improving renters’ rights and more. 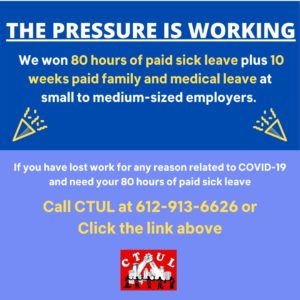 We have now had to greatly shift our priorities and go into rapid response mode because of the COVID crisis. Direct outreach to Downtown workers and construction workers on job sites had to stop because of stay at home orders. This means that our timeline for the campaigns will have to shift. We are pursuing strategies that will support workers with emergency assistance, respecting their rights, and granting us access to workers to be able to organize in the future.When businesses started getting shut down, we immediately sent texts through our messaging software Hustle to engage our base, identify the impact and needs, and give information about how to participate in the April 1 rent strike. From those messages and phone calls, we have identified around 300 people in our base who want information and support from CTUL. Ruth created reporting systems for organizers to quickly share information they were hearing. We learned:

We are now working on several things to continue supporting the base and building power. First, we are creating information and resources for the base so that they know their rights and know how to access benefits. We are training organizers on application processes to support members in applying for benefits. We are also creating Facebook groups for Construction, Defensores, and Future Fighters. We are collecting stories from our members and publishing them, either on our own social media or preparing workers to speak with reporters. We are shifting into engaging our base in online meetings, identifying what are the most pressing things that people want to fight for short-term and long-term. We are also preparing staff to do political education in a new way, through photos and messaging. Last, we have seen a lot of wage theft in the past month due to workplaces closing, or workers being fearful of losing their jobs. We are supporting many workers in writing letters to their bosses and landlords.

Member and Board development/Defensores and Future Fighters 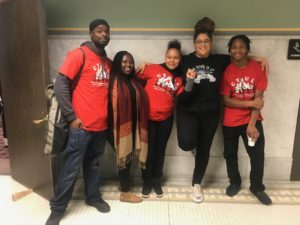 Member Meeting in March, 3 members facilitated, we shifted the meeting to also talk about COVID, political education around gender and race, anti-black comments by a Latino member and racial tensions surfaced, certain members and staff showed leadership in addressing those tensions in the meeting, staff later has done more reflecting and created an action plan to address the member who consistently shows up with an anti-black attitude. We are going to tell her she has consistently acted in opposition to CTUL’s mission, we’ve tried to talk with her about it and she continues, so she is no longer welcome in our meetings and activities.

Future Fighters decided to organize CTUL’s first Juneteenth event! Juneteenth is on June 19th and is the celebration of the end of Slavery in the United States (hopefully this will still be possible, but plans may need to shift because of continued social distancing measures).

The board established working Committees for the first time ever! Committees include:

Lead organizers have been participating in video conference trainings to learn how other organizations are continuing base organizing from home. 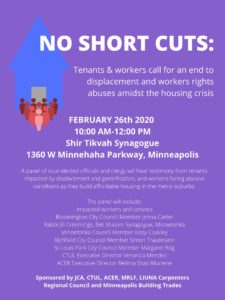 Directors are bringing staff into Board meetings to report on different areas of work.

Veronica led the staff in some follow up conversations around communication and how we strengthen communication across the organization, making sure that we are getting everyone the information that they need from the top down, from the bottom up and all around.

Since the Coronavirus, Directors began having video conferences every 2 days and now once a week to make sure we are able to make decisions as things change quickly. Changes we have moved include:

Becky and Ruth created a new and very in depth process for staff to work with their leads to determine their own leadership development paths for the year. It was very robust to make sure that staff are growing in the areas that the organization needs them to grow, that they want to grow, and that the movement needs people to grow.

Veronica will be off on maternity leave from Mid april until mid August. Some of her responsibilities will move to other staff and some responsibilities around new coalition building  will not continue in her absence

Building Dignity and Respect Standards Council (BDC), the construction monitoring organization that workers in construction developed, has finally hired its first staff! Now it can create an infrastructure it needs to be effective in its work advancing standards in the construction industry 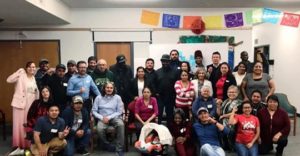 CTUL coordinated a coalition of affordable housing organizations and Trade unions in a powerful coalition of workers and tenants standing together in a forum calling on developers and finance to support fair housing. This is HISTORIC!! These groups have usually been pitted against each other with developers saying “we can either have housing really be affordable or we can pay workers good wages but we can’t do both”. We have started building a real relationship around all of us saying NO! We demand both and we know you can afford it. This is the first time in the Twin Cities when these two groups have stood together to fight for affordable housing and fair working conditions, and sent a powerful message to developers in the Twin Cities. Over 20 CTUL members participated in the forum.

Construction organizers are supporting a construction worker in a new labor trafficking case. The worker’s employer was threatening to kill the worker for standing up for his rights. 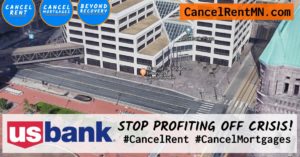 CTUL created a petition demanding 15 paid sick days in response to COVID-19, with gathered over 3,300 signatures.

CTUL together with Tending the Soil launched a statewide coalition of base-building organizations in response to COVID-19. The goal was to discuss how each of our bases have been impacted, or potentially will be impacted by COVID-19 and the economic crisis. This turned into an alignment of organizations under MN COVID-19 Response that quickly turned out a series of demands regarding immediate needs for impacted communities and shaped a narrative that was spread far and wide across social media. In just 24 hours, the website had over 2,600 unique visitors and over 5,000 page views. We were able to put our list of demands list in front of the Governor’s Office, House leaders and Senate leaders in Minnesota. This led to several immediate demands moving on a state and local level including expanding unemployment, a moratorium on evictions, stopping price gouging, and others. This group then shifted towards a federal level, uniting dozens of organizations calling for similar demands in the federal package. This is now focused on a moratorium on rent and mortgages, as well as municipal funding to cover communities that fall through the cracks. CTUL member Mayela participated in a roundtable hosted by Ilhan Omar to share her perspective as a CTUL member and immigrant woman about the need for a rent freeze.

As part of MN COVID-19 Response, CTUL is leading fights against U.S. Bank and Wells Fargo to demand: a moratorium on rent and mortgages, ongoing investment in affordable housing that respects workers rights, and paying into a fund that supports downtown workers who are laid off because of COVID-19.

CTUL partnered with Inquilinxs Unidos in organizing for a rent strike, including a powerful action outside of U.S. Bank headquarters in downtown Minneapolis 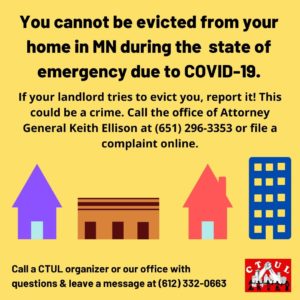 Becky has been engaging with a national network of organizations to learn about and build strategies around what to do with our staff during the coronavirus, bringing critical information to help directors craft policies together. 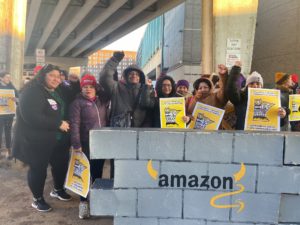 We have gotten a lot of press coverage with members telling their stories of how the community has been impacted by COVID-19, and how they are leaders to fight for change. Members who have spoken publicly include: Eric, Ignacia, Sanethea, Fredy, Mayela, Sandra. Press Coverage:

General storytelling: We are building a plan for members to share their stories and photos/video on our social media in order to build our narrative about who is falling through the cracks and what structural changes we are demanding. Also, how community is in solidarity with one another, helping each other out. We are building a file of images and discussion questions to use in meetings, text messages, facebook groups, to have discussions about race, class, and gender with our members.

CTUL is supporting several mutual aid efforts to ensure that our members who are impacted by COVID-19 and the economic crisis get immediate relief. Work in this area includes:

We had to cancel the Pancake Brunch due to Coronavirus but Sheff shifted to online strategies and was still able to raise $8,300 out of their original goal of $10,000 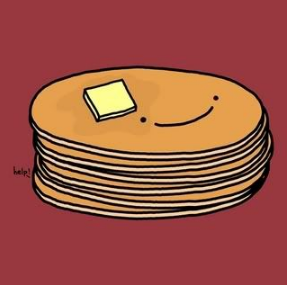 Priority 3 – Risk management, but not be on the defensive

CTUL signed a legal retainer with Public Citizen and Adam Pulver (the leading legal expert on worker centers in relation to labor organizations) to represent the organization against the attacks from the Department of Labor.

CTUL partnered with NELP and Jobs with Justice to pull together the most powerful worker centers in the country in a gathering to build a national response to the attacks on our organizations.

CTUL is launching a nine month process to decide on structures that fit our new vision for the organization, and that shore us up against potential attacks.

CTUL closed the space to public meetings, and is contracting extra cleaning to avoid the spread of COVID-19.

CTUL administrative staff got Zoom for meetings, and is getting trainings for staff on how to use Zoom securely.

Administrative staff set up a mailbox outside of the office to continue getting mail.

Applied for PPP (forgivable small business loans related to COVID-19) in case our budget is impacted later this year.

The Accumulated Balance shows a deficit for the first two month of this year. This deficit was covered with the Gross Profit Accumulated from 2019. The organization has sufficient balance in the savings and Checking account to easily cover 6 month expenses.

After reviewing the 2019 financial statement, we are recommending to transfer a portion from checking to the Operations Reserve Fund and Capital Reserves.