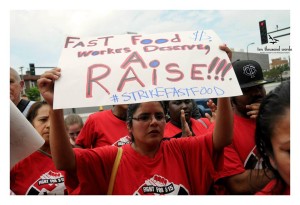 We work for corporations that generate tremendous profits, but don’t pay employees enough to cover basic needs like food, health care, rent, and transportation. Many of us have families to support, and far too many of us are forced to rely on public assistance to scrape by.

And in 2015, we’re getting close to winning. Fast food workers, airport workers, home health care providers, retail workers and more are joining the fight for $15 an hour and the right to form a union without retaliation.

In the Twin Cities there will be a Week of Action with several organizations fighting for fair wages and respect from April 12-16. For details on all of the actions, keep an eye on the Minnesotan’s for a Fair Economy website.