On a press conference call Monday, national and local experts unveiled a memo detailing the legal basis for a $15 minimum wage in Minneapolis. 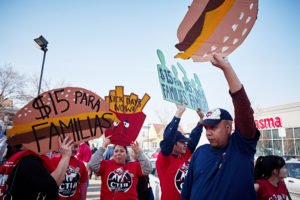 “Minneapolis has the opportunity to tackle years of declining wages by joining the growing number of cities and states that have adopted a $15 minimum wage. Legal analysis shows that Minneapolis residents have a right to place a $15 minimum wage on November’s ballot and that, if challenged, the courts would uphold such a measure,” said Laura Huizar, staff attorney with the National Employment Law Project.

Marty and Huizar noted that that the majority of courts around the country that have considered whether a city can enact a local minimum wage have upheld those local laws unless they have been explicitly or impliedly preempted by state law. Minnesota law does not preclude a local minimum wage.

Workers who have been organizing for a $15 minimum wage applauded the release of the legal memo as another tool and step toward a living wage for all Minneapolis workers.

“Fast food workers have been organizing in the workplace and in the streets to gain support to raise the minimum wage,” said Steven Suffridge, a McDonald’s worker organizing with CTUL. “I haven’t been able to save money to go visit my family in almost a decade because making nine dollars an hour doesn’t allow me to save. It is barely enough to make ends meet. Raising the minimum wage would help us emotionally, physically, and mentally. We could be healthier and happier. We will continue to fight until we get $15 here in Minneapolis, and we are very close.” 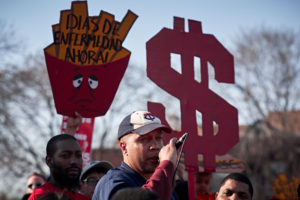 “I support a $15 minimum wage because it will directly affect many of the problems in equity Minneapolis has as well as create a more prosperous and positive community for everyone. Currently, more and more people have to work ridiculous hours at multiple jobs which in many cases leaves no guarantee they will even have enough to get by. It also doesn’t allow them time to function like human beings,” said Marcellina. “Having little to no time to build family, community, and find happiness creates physical and mental health damage and brings our society down, not only affecting those struggling to live but everyone in Minneapolis. When we as a city are able to vote on this, we can pass a $15 minimum wage together, and keep shaping the path to equity for all.”