The Fast Food Industry has had bad wages and benefits for too long!

The fast-food industry has grown a lot in the last few decades, bringing in millions of dollars of revenue for those on top of the food chain. But this wealth has not been shared with the workers who are making it all possible. With the poverty wages and terrible benefits that most fast-food chains offer, it’s extremely difficult to provide for a family, even when working multiple jobs for more than sixty hours a week.

Fast food workers in the Twin Cities have been organizing with CTUL as part of the national Fight for $15 and the right to a union since the fall of 2014. They have lead several strikes to call on employers such as McDonald’s to pay a living wage and provide benefits to their employees, and in the process workers have won many local victories to improve conditions in their workplaces.

Fast food workers in Minneapolis played a crucial role in winning the Earned Sick and Safe Time ordinance in May of 2016 and continue to lead the fight to raise the minimum wage to 15/hr. 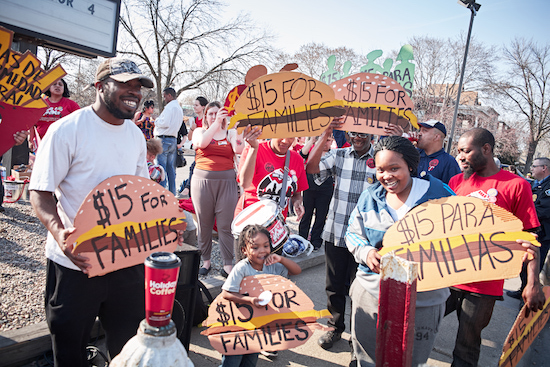 Workers have organized to win 33% wage increases across the industry – the first raises workers had seen after over a decade of declining wages.

Joined together with thousands of workers across the country in two McDonald’s Shareholders Meetings.

Fast Food workers have lead 5 strikes in the Twin Cities.