We won an increase in the state minimum wage! This is an important step in the movement for workplace justice . Now more than ever we need to step up the fight to ensure fair wages that pull workers out of poverty!

While this is an important step in the movement for fair wages, $9.50 / hour still leaves hundreds of thousands of hard-working families in poverty while the wealthy keep getting richer off of our labor. Stay tuned over the next few days for a huge announcement in the Campaign for Justice in Retail Cleaning as we keep fighting for fair wages. In the meantime, check out this brief history of CTUL’s involvement in the fight to increase the minimum wage.

In February 2014, CTUL began to lead Fair Wage Wednesdays, calling out the companies that were opposing an increase in the minimum wage. For several Wednesdays in a row, low-wage workers and community allies went to Target Corporation headquarters as well as other locations asking the corporations to stand with the majority of Minnesotans who were calling for an increase in the minimum wage. Rogue Citizen organized a community event in which five local artists each made 40 works of art, with bidding on the works of art starting at minimum wage. All of the proceeds from the event went towards CTUL and the Greater Minnesota Workers Center. On the last Fair Wage Wednesday before the opening of the legislative session, CTUL and community allies called on Target CEO Gregg Steinhafel to take the Minimum Wage Challenge, to see if he could live on minimum wages for one week. On the opening day of the legislative session, CTUL joined hundreds of low-wage workers and allies at the Capitol for a huge rally. Two days later CTUL led a march with around 200 low-wage workers (including retail janitors who work for contracted companies cleaning Target and other stores, Walmart workers, airport workers and more) and community allies through the downtown Minneapolis skyways, calling on Target Corporation to support an increase in the minimum wage. 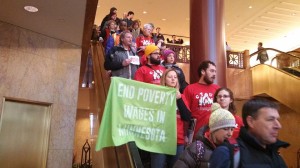 Several CTUL members also testified in legislative hearings over the next several weeks. As time went by, more and more CTUL members engaged in the struggle by participating in regular strategy meetings, and putting up pictures on social media calling for an increase in the minimum wage tied to inflation. Finally, after tons of grassroots pressure from dozens of labor, community, student and faith-based organization, we won an increase in the minimum wage, tied to inflation. CTUL members were cited in several articles about the victory:

The following Saturday, CTUL held a Community Forum on the Minimum Wage, reflecting on the victory, and talking about next steps in the movement to gain fair wages. We were joined by State Senator Jeff Hayden and Minneapolis City Council Member Alondra Cano. 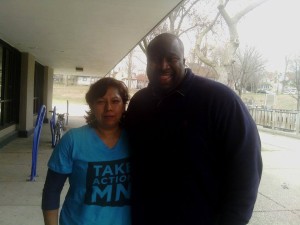