A HUGE VICTORY FOR WORKERS IN MINNEAPOLIS Today, Friday, May 27, 2016, the Minneapolis City Council voted unanimously to pass Earned Sick and Safe Time. This historic vote comes after more than a year of leaders with Centro de Trabajadores Unidos en Lucha (CTUL) and many other organizations fighting to win. Beginning July 1st, 2017, thousands of workers will be able to care for themselves and their families without having to choose in between their health and earning a paycheck. The lack of access to earned sick and safe time currently impacts a disproportionate amount of women and people of color. 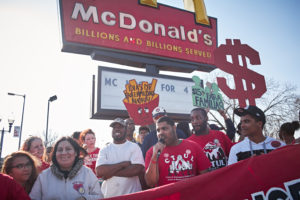 CTUL has worked with allies at many organizations including Neighborhoods Organizing for Change (NOC), Working America, Take Action MN, SEIU and countless others to make this a reality. But, the initial push to open the space to dream about this ordinance came from low-wage workers across the city who courageously and relentlessly have been organizing to make a difference on the job and in their lives. ”Passing earned sick and safe time is a huge victory for workers and our families. Fast food workers and janitors with CTUL have been striking for the past few years for higher wages, union rights, a voice in the workplace and benefits like paid sick days and finally our city is taking a big step to help us workers and our families. We deserve to take care of our health and our families as well,” said Guillermo Lindsay, a McDonald’s worker and member of CTUL.

Low-wage workers across the Twin Cities have been organizing with CTUL, leading a series of strikes over the past three years to demand living wages, benefits like earned sick and safe time, and respect and dignity in their workplaces. This leadership allowed for dialogue to be opened in between the workers most directly impacted by this issue and elected officials with the power to change it. In addition to being in the streets leading direct action, CTUL members sat on the Workplace Partnership Group, dedicating countless hours to help shape the ESST proposal that passed in Minneapolis. Because of the amazing organizing and courage of our leaders, workers have been winning many changes in the workplace and can now add a city ordinance victory to that list as well. 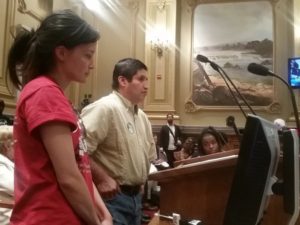 “Having participated as a leader in many strikes and marches for better wages and benefits in my workplace, and having met with many elected officials to talk about the need for better wages and benefits in the city, I am happy to see that my work helped open the space to win paid sick days in Minneapolis. This is a huge help for us and our families. In my case, without paid sick days I can’t financially support my kids in Mexico who have chronic health conditions. It’s either my health or theirs that is jeopardized so this will be a huge relief,” Pascual Tapia, CTUL member and retail janitor.

We are very proud of this victory! This is a testament to our base that when we organize, we win! This would not have been possible without the leadership of workers impacted by this very issue, and without the broader coalition of amazing organizations in the Twin Cities. All of the strikes, rallies, and risks are paying off so we will continue to fight until we have an economy that works for all of us and not just a few wealthy CEOs.