Today is a significant day for CTUL and for workers’ rights: 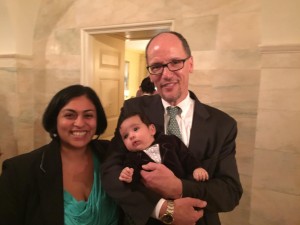 Bear with us here…because so much is happening at once, we want to provide all the information about these important events… Retail janitors who work for contracted companies cleaning stores like Macy’s, Kohl’s, and others announced a November 10 strike deadline, calling for $15, fair scheduling, paid sick days and an end to wage theft. Workers cited ongoing abuses in the industry, from sub-poverty wages to lack of benefits to wage theft. Jesus Sanchez (speaking in the picture above), who works for Capital cleaning a Macy’s and Herbergers store, talked about an ongoing class action lawsuit he and his co-workers are leading in which workers describe a situation where they were making as low as $4-5 an hour. Guillermo Lindsay, CTUL member and McDonald’s worker, was Co-MC of the #MPLSWorks press conference together with Lennox from Working America

Dozens of CTUL members joined workers from NOC and Working America to call for $15, fair scheduling, paid sick days, and an end to wage theft in Minneapolis. Minneapolis workers from many different industries spoke out about how these issues impact their lives and the lives of their families, and why they are supporting the Minneapolis Working Families Agenda. 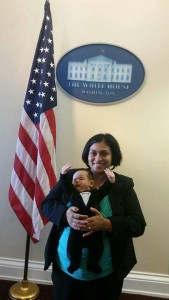 A White House press release describes the purpose of the Worker Voice Summit: “As we work to continue to address economic inequality, and as we adapt to the challenges and opportunities presented by our changing workforce, the Summit on Worker Voice will look to energize a new generation of Americans to come together and recognize the potential power of their voice at work.”

The emphasis on worker voice is crucial to real lasting change. No true change can happen in the workplace if workers are afraid to speak out about their rights for fear of retaliation. CTUL’s Campaign for Justice in Retail Cleaning provides important context to understand this. In looking at addressing rising inequality, however, we must look at not only the changing workforce but the changing economy.

Large corporations are increasingly distancing themselves from responsibility for the working conditions of the workers along their supply chain who produce their wealth. They do this through subcontracting, temp labor, part time isolated labor. As a result, workers have less and less power to bargain with the people who actually make decisions about their lives. Previous to organizing in the retail janitorial industry, wages and working conditions were spiraling out of control

Workers report that in just a decade, wages had dropped by several dollars an hour while workload nearly doubled. Wage theft was commonplace, with workers at nearly every company in the industry complaining of different schemes used to withhold workers’ wages. In one case, janitors who cleaned Target, Best Buy, Sears and other stores complained of having to work seven days a week. According to the workers, supervisors forced workers to punch in with a “ghost employee” time card on the seventh day so the company could avoid paying overtime. Workers were able to reach a settlement in a class action lawsuit for $675,000 in back wages and damages in this case. All too often workers are afraid to speak out about these abuses, fearing that they will lose their job or fearing some other form of retaliation. In a recent survey conducted by CTUL members with low-wage workers in the Twin Cities, 51% of the janitors stated that they did not feel that they could speak with their supervisor about problems in the workplace without facing some form of retaliation. Take a second to let that sink in. Over half of the workers feel that they cannot even speak with their supervisor about concerns without fear of retaliation, much less come out in any public way through a lawsuit or collective action. In one extreme case, an employer head-butted a worker sending him to the hospital, all for simply asking for his overdue paycheck.

To understand what is happening in retail janitorial work, we have to look at how the work is contracted out. Large retail chains like Target, Macy’s and Kohl’s contract out the cleaning of their stores, pitting dozens of janitorial companies against each other for the contract. As companies become desperate to win large, lucrative contracts with brand name stores, some choose to gain the competitive edge by breaking the law – paying less than minimum wage, or not paying full workers compensation insurance. In essence, the large retail chains dictate the parameters of wages and working conditions for the contracted out janitorial work by creating a system in which they reward contractors for establishing the lowest price for the bid. This system also works to undermine workers’ voices, as workers become afraid to speak out too loudly about abuses for fear that the store could cut the contract with the cleaning company, leading to the worker losing their job.

In this context, the cause of the severe economic inequality described in the White House release and lived by millions of low-wage workers becomes clearer. The CEO of Macy’s, Terry Lundgren, made the equivalent of $7,931 per hour in total compensation in 2014. In half a day’s work, Mr. Lundgren made more than the janitors who clean his stores make in an entire year. Moreover, janitors who clean Macy’s stores in Minnesota are currently leading a class action lawsuit against their employer in which workers describe situations where they were making as little as $4-5 an hour – significantly lower than the state minimum wage of $8.00 an hour at the time the lawsuit was launched. At least one of the workers asserts that she was fired after complaining about unpaid wages.

If workers fear losing their livelihood (and in some cases fear physical assault) for merely requesting wages for work they did, how could we expect any different result?

Over the past five years, retail janitors have organized with CTUL to change this reality, with the goal of winning fair wages, fair working conditions, and most importantly, a voice in the workplace. Now workers have set a deadline for a strike on November 10, 2015, calling for $15, fair scheduling, paid sick days, and an end to wage theft.

But getting to this point wasn’t easy…workers had to overcome their fear and realize the power of their collective voice. When the campaign began, a few workers felt bold, but many were still afraid. These few began to lift their voices, inspiring their coworkers to do the same. Day by day more workers felt more confident to stand up and claim their own power. As a result, workers have had enormous success, including:

Most significantly, after retail janitors marched through Minneapolis, led a 12-day hunger strike, and walked off the job on strike several times, Target Corporation entered into dialogue with workers to deepen their understanding of the reality workers were facing. After over a year of dialogue between Target and CTUL members who work in retail cleaning, Target has taken a leadership role in the industry by establishing a Responsible Contractor Policy (RCP) regarding the contracted cleaning of its stores in the Twin Cities metro area. This policy guarantees basic workplace standards for the contracted janitorial work, including:

There is still a lot to do to change the industry. Workers are still paid well below the poverty line, receive little to no benefits, and have no clear means to have a voice in the workplace without fear of retaliation. But one can see that as more workers overcome their fears, speak out about abuses, and are able to make their voices heard, more positive change comes in the industry. Now retail janitors have set a strike deadline for November 10, calling for $15, fair scheduling, paid sick days, and an end to wage theft.

Join retail janitors and low-wage workers throughout the Twin Cities who are fighting for $15, fair scheduling, paid sick days, and an end to wage theft in our workplaces, in Minneapolis and across Minnesota!