As we wrap up Shareholder’s Season, we would like to reflect on why we make sure that low-wage workers participate in shareholder meetings, and what we accomplished this year.

Every spring, leadership of the largest, most powerful corporations in the world gather for their annual shareholder meetings. In these meetings, the 1% dictates to a large part the future of the economy for the rest of the world. Over the past few weeks, CTUL members who are a part of the Retail Janitor Campaign and the Fast Food Campaign attended several shareholders meetings to ensure that the voice of the low-wage workers who create the wealth of these companies is heard loud and clear. CTUL members traveled the country to participate in shareholder meetings with Kohl’s, McDonald’s, Best Buy and Herberger’s (part of BonTon). 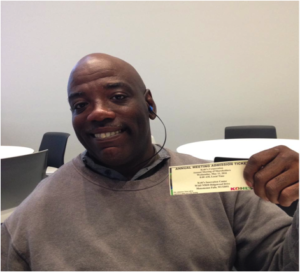 Stephen Thompson, a retail janitor who works for Kimco Services (the company contracted to clean Kohl’s, JC Penney, Burlington Coat Factory, and Home Depot in the Twin Cities metro area), attended the Kohl’s shareholder’s meeting on May 11th to let the CEO and shareholders know about conditions that workers face while cleaning Kohl’s stores in the Twin Cities metro area. Stephen called on the company to contract a responsible contractor to clean its stores in order to ensure that the janitors who clean its stores are able to live healthy lives. We need time to spend with our families and take care of our families. Kohl’s is doing well and janitors feel like we’re getting left behind. Will you sit down and meet with us?” asked Stephen Thompson of Kohl’s CEO. 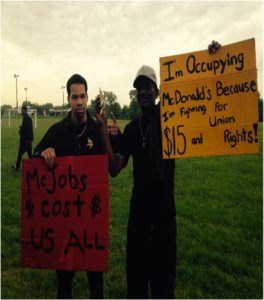 Fast food employees from the Twin Cities joined thousands of fast food employees and allies in Oak Brook Il, for the McDonald’s Annual Shareholder’s Meeting. The suburban Chicago headquarters were shut down for a third year in a row as fast-food workers protested at the company’s annual shareholders meeting with calls for wages of at least $15 an hour and union rights. This was the largest and most aggressive protest yet. 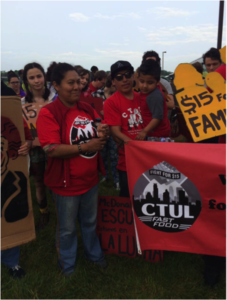 Leaders with CTUL have been organizing locally and have been a part of the national movement as well. CTUL leader, Blanca Gonzalez joined the protests for the second year in a row. “Our wages are unjust. We are the ones who put out all of the work and we deserve to live better. We are exploited in our jobs. The bosses and corporations continue to fatten their wallets yet our quality of life does not improve. Fast food corporations take advantage of people of color, immigrants, and women by paying us poverty wages and we are here to ask for a change.” Blanca Gonzalez.

CTUL leader Charles Thorton attended the shareholders meeting for the first time. “We are here because we need better working conditions, resources for our families, retirement benefits, and security in our stores. I have worked in fast food for six years and I never get to work forty hours in a week. They always keep us at thirty-two hours so we aren’t considered full time and get the benefits that come along with that. We want corporations to realize that the little man counts too. We have families and grandkids to take care of as well.” 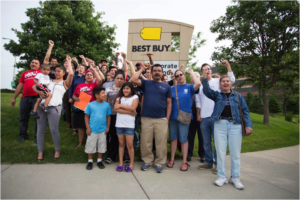 Best Buy, one of Minnesota’s largest corporations, committed to play a leadership role in the retail industry by contracting a responsible janitorial company to clean Best Buy stores in the Twin Cities metro area. This is a significant step in the campaign to win justice for all retail janitors and provides strong leadership for other retail companies to follow. “I’m happy that Best Buy has heard our voices and has taken a leadership role to improve the janitorial industry here in Minnesota,” said Jose Gonzalez, an employee of KBS who cleans an area Best Buy store. “I am confident that janitors who clean Best Buy will be able to begin a dialogue with our employees and improve our working conditions.”

“We went to York, Pennsylvania to the annual shareholder’s meeting of Bon-Ton Corporation, which runs Herberger’s brand stores in Minnesota. We spoke to the CEO and a vice president and talked to them about the problems we’ve had with Capital, the cleaning contractor that cleans Herberger’s stores, and the company that I work for. They committed to establish a responsible contractor policy, and we are now working with the company the move that forward. I feel happy because this will make the difference in many workers’ lives — not just mine. This opens a path to better wages and respect on the job. That’s the reason why we do all that we do,” Leticia Zuniga, retail janitor and CTUL member.

When we fight, we win! We will continue to organize for better wages and working conditions so that low-wage workers in Minnesota are paid fair wages, have access to benefits that ensure they live healthy lives, and have a voice that ensures that they are treated with dignity and respect.