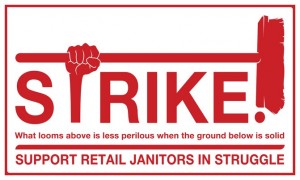 Retail janitors in the Twin Cities have decided that enough is enough! Workers have organized with CTUL to recover hundreds of thousands of dollars in unpaid wages and damages, and have won the first pay raises after over a decade of declining wages. The response from cleaning companies? More and more workers report ongoing illegal intimidation of workers for their organizing efforts.

Retail janitors are now calling on Target sub-contractors to open dialogue with workers and CTUL to ensure that workers have the right to organize without fear of retaliation. If the cleaning contractors refuse to open sincere dialogue, workers will go on a 48 hour strike starting June 10th at 5:00pm.

– Click here to stand with workers before the strike

– Click here for the schedule to join striking workers