CTUL members and allies from faith, labor and community groups came together at the Quarry Shopping Center in Minneapolis as part of a national day of action to call for a raise for low-wage workers living in poverty. 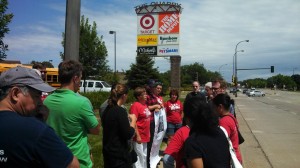 Following a brief press conference, janitors who are employed by sub-contractors to clean Target, Home Depot and other stores in the Twin Cities, led delegations to nearby stores. The delegations delivered letters informing managers about the wages and working conditions faced by janitors who work for contracted companies cleaning their stores. 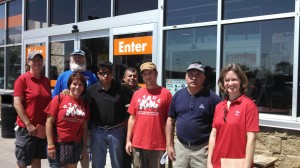 CTUL members were joined by members of the St. Paul Federation of Teachers, who spoke powerfully about the need for fair wages for the parents of the children in our schools

“I am a single mother with four children. $8 an hour is not enough to survive on – we have to share a trailer with other families to be able to afford rent,” said Maricela Flores, CTUL member and Carlson Building Maintenance employee who cleans a Target store. “As retail janitors we are surrounded by food and clothes every evening at work, yet we cannot afford to provide for our own families. I am organizing for fair wages.”

After the rally and delegations at Target and Home Depot in Minneapolis, workers traveled to Eurest Services Cleaning in Edina, where they delivered a letter to their employer outlining their ongoing demands around fair wages and respect in the workplace, calling for dialogue with their employers. 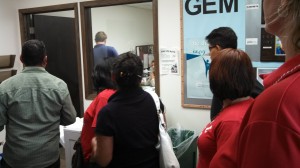 The manager at Eurest Services refused to open the door to speak with workers. Undeterred, workers spoke loud enough for the manager to hear them through the door. 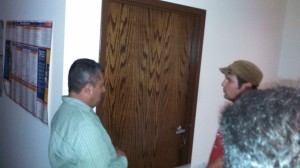 “I work for Eurest Services cleaning a Home Depot,” said Luciano Balbuena. “I have cleaned the same store for three years, and I still only earn $8.50 per hour. We work hard, and we deserve fair wages – that is why we are organizing!” 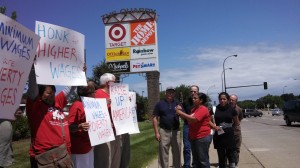 Wednesday’s event was part of a national day of action calling on corporations and politicians to raise wages for millions of the country’s lowest-paid workers. Thousands rallied in 40 cities across the country.