Stay tuned for announcements about other upcoming actions

On Tuesday, July 29, around 20 retail janitors and community allies led delegations to deliver letters to the managers of three stores in the metro area. The first store we visited was Marshalls in Maple Grove. There we delivered a copy of the letter CTUL sent to TJX Companies (the parent company of Marshalls) earlier in the month, informing the company about issues taking place in the contracted cleaning of stores, and calling on the company to follow the leadership of Target Corporation by adopting the same Responsible Contractor Policy that Target will be using with new cleaning contractors at their stores. The delegation also delivered another message to the manager. 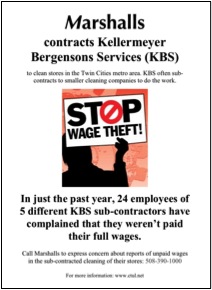 Two workers who worked for contracted companies cleaning Marshalls stores recently approached CTUL with claims of up to $2,500 in unpaid wages. Marshalls stores in the Twin Cities contract Kellermeyer Bergenson’s Services (KBS), which in turn sub-contracts to other cleaning companies. This most recent report of wage theft does not appear to be an isolated incident; in fact, in just the last year, CTUL has been approached by employees of 5 different KBS sub-contractors in 15 separate incidents involving 24 workers who complained that they were not paid their full wages.  The delegation to the Marshalls store requested that the manager contact the parent company of Marshalls (TJX Companies) and KBS to inform them of the most recent complaints. From there, we visited the manager at the Kohls store in Plymouth. Kohls has contracted with Eurest Services to clean stores in the Twin Cities, the same company that is the subject of an ongoing lawsuit alleging up to 35 hours per week of unpaid wages for several supervisors. Finally, we concluded with a visit to the manager at the Sears store in Eden Prarie Mall. Sears contracts Diversified Maintenance Systems to clean their stores in the Twin Cities. Just last year DMS paid $675,000 to settle a class action suit brought by workers in Minnesota alleging that workers were forced to use “ghost employee” timecards so that the company could avoid paying full overtime hours. This was not an isolated case. In the last 10 years, DMS has settled 10 private lawsuits and there have been 6 investigations by the United States Department of Labor (USDOL), alleging violations of minimum wage and overtime laws.