After several years of organizing for fair wages and working conditions in contracted retail cleaning, Target is beginning to implement an historic Responsible Contractor Policy, ensuring workers rights to organize a union without fear of retaliation. While this is an important victory for retail janitors and CTUL, there are still hundreds of janitors in the Twin Cities metro area who are not covered by the policy, meaning workers face the status quo of poverty wages, ongoing reports of wage theft and dangerous working conditions, etc. Check out this article that was just published in City Pages about allegations of wage theft at KBS sub-contracted companies involving the cleaning of Marshall’s, TJ Maxx and other stores.Join workers and CTUL as we continue to call on retail stores like Kohls and Best Buy to follow Target’s leadership by implementing the same policy for the contracted cleaning of their stores.

WORKERS ON THE RISE! Sick and tired of the ever-increasing division of wealth in the U.S., low-wage workers across the country are standing up and fighting back. From tomato pickers in Immokalee to guestworkers at the Hersey’s factory and beyond  to Walmart workers to fast food workers to retail janitors in the Twin Cities, workers are taking a stand, and winning real change. Here in the Twin Cities, retail janitors with CTUL are continuing the fight, building on the recent victory with Target Corporation creating a new Responsible Contractor Policy. Around 20 retail janitors and community allies led delegations to deliver letters to the managers of three stores in the metro area: Marshalls, Kohls and Sears. The delegations followed up on a letter CTUL sent to the corporate headquarters of 20 major retail chains that have stores in the Twin Cities, calling on the companies to follow the leadership of Target Corporation by adopting the same Responsible Contractor Policy that Target will be using with new cleaning contractors at their stores.

Two workers who worked for contracted companies cleaning Marshalls stores recently approached CTUL with claims of up to $2,500 in unpaid wages. Marshalls stores in the Twin Cities contract Kellermeyer Bergenson’s Services (KBS), which in turn sub-contracts to other cleaning companies. This most recent report of wage theft does not appear to be an isolated incident; in fact, in just the last year, CTUL has been approached by employees of 5 different KBS sub-contractors in 15 separate incidents involving 24 workers who complained that they were not paid their full wages.  The delegation to the Marshalls store requested that the manager contact the parent company of Marshalls (TJX Companies) and KBS to inform them of the most recent complaints.

Videos from the Victory Announcement 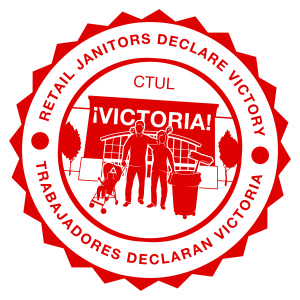 Centro de Trabajadores Unidos en la Lucha (CTUL) has just won a huge victory with sub-contracted janitors who clean retail stores in the Twin Cities metro area. Here are some highlights after a whirlwind of celebrations:

“The janitors who clean Twin Cities Target stores announced victory today, after the retailer agreed to a new policy that will give the workers better conditions, including the right to collectively bargain, and ensure workers are not forced to work seven days a week.”

“…a strong core of leaders in the industry, who have gone on three strikes…that’s the mechanism of enforcement.”

After four years of organizing including leading three strikes against cleaning companies in 2013, and a year of dialogue between Target Corporation, CTUL and retail janitors, Target is taking a leadership role in the industry by adopting new language in an unprecedented Responsible Contractor Policy that will be implemented for new cleaning contracts at their stores. The policy is the first of its kind nationally in the industry. CTUL is now calling on every other major retail stores to follow Target’s leadership by adopting the same Responsible Contractor Policy, including:

This victory paves the way for workers to gain fair wages, benefits, and a voice in the workplace, and has implications that move well beyond the estimated 1,000 retail janitors in the Twin Cities, opening the door to ensure that low-wage workers of color have a place at the table in deciding the future of work. Fundamentally this is part of CTUL’s vision of empowering low-wage workers to play a leadership role in reorganizing the economy to ensure that it works for everyone, not just the 1%.

Join us in celebrating this tremendous and unprecedented victory, and in calling on other Big Box stores to follow Target’s leadership!

And in case you missed the reports of previous actions…

What a day! Hundreds of workers and community allies made it through the freezing cold for four and a half hours on a picket line with striking retail janitors this morning. Click here for pictures from the picket.

In case you missed the previous two strikes, check out the pictures and reports here: