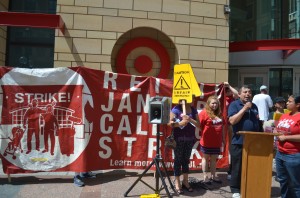 Retail janitors who work for contracted companies cleaning Target and other stores in the Twin Cities announced that they are set to walk off the job again if employers continue to refuse to open dialogue with them and CTUL regarding the right to organize without fear of retaliation. The announcement comes on the heels of a wave of strikes happening throughout the country in the service sector, including strikes at Walmart and fast food companies (Check out this article by Josh Eidelson). 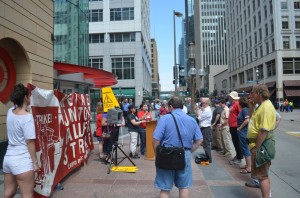 Since the last strike in February, workers continue to report violations of their rights. Therefore, workers set the deadline for 5:00 p.m. on Monday, June 10th for retail cleaning contractors like Diversified Maintenance Systems, Carlson Building Maintenance, Prestige Maintenance USA, and Eurest Services to open dialogue regarding the right to organize without fear of retaliation. Should the companies not agree to the worker’s request by the deadline, the workers have agreed to strike, demanding the right to organize without fear of retaliation, which could occur at any time following the deadline. 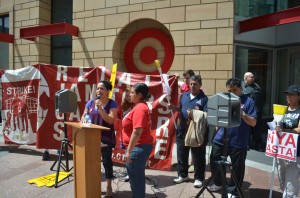 “I work for Carlson Building Maintenance cleaning a Target store,” said Maricela Flores, a member of CTUL. “I am a single mother raising four kids. With my wage being so low I can’t afford to support my family. I am sick and tired of the company ignoring us. The only time they pay attention to us is when they retaliate against workers. That is why I am ready to go on strike again to demand the right to organize.” 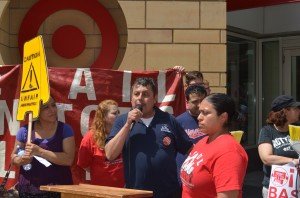 “We want our rights and we want to be respected,” said CTUL member Emilio Miranda Rios. “In September, I was injured on the job and had to go two months without medical attention because my company, Eurest, refused to accept responsibility.  I was out of work for three months with no income, and I had to go to a food pantry just to survive. For eight years I have been cleaning Home Depot and JC Penny stores receiving miserable pay, waiting for better wages and working conditions. I am ready to go on strike to make sure that my rights and the rights of others to organize without fear of retaliation are respected.”

Target Corporation will be holding it’s annual shareholders meeting in Denver, Colorado on June 12. Workers plan to attend the meeting to inform Target shareholders about our concerns of violations of workplace rights at contracted cleaning companies that clean Target stores.