Time for Fair Wages and an End to Wage Theft

Op-Ed by Duniyo Hussein, CTUL member and an employee of Capital Building Services Group who cleans a Macy’s store 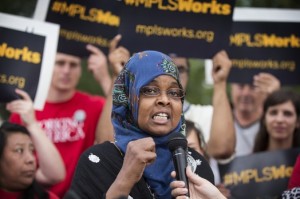 Photo by Leila Navidi of the Star Tribune

I recently received my first paycheck since the Minnesota state minimum wage went up to $9 an hour. Despite working for over a year at Capital Building Services Group cleaning a Macy’s store, I am still paid minimum wage. Before August 1st that meant that I was paid $8 an hour. I support my three children who are in Somalia by sending money back home. One day, I hope to bring them to the United States for their education. However, making minimum wage means I have no money to save for their future, and find it difficult to meet even my own basic needs, like rent and bills.

The increase to $9 an hour will make a significant difference for us, bringing an additional income of $2,080 per year. This is money I can use to pay my bills and send home to make sure my children are taken care of.

Yet at $9 an hour, I will make around $18,500 a year – well below the federal poverty threshold of $23,492 a year (according to the United States Census Bureau for a family of four), and significantly less than a “family-supporting wage” in Minneapolis of $40,000 a year (according to the 2013 One Minneapolis Report). My family, and the families of hundreds of thousands of working Minnesotans, will still struggle to survive, having to make impossible decisions between the rent today and the hope of getting our children an education in the future.

Surviving on sub-poverty wages is even more difficult when considering the prevalence of wage theft. From 2005 – 2014, the United States Department of Labor found over 5,500 violations of federal wage and hour laws by employers just in Minneapolis, totaling over $2.7 million in unpaid wages. I am currently a plaintiff in a class action lawsuit regarding allegations of wage theft in the contracted cleaning of Macy’s and other stores.

While the pay increase we will be seeing is a good first step, more needs to be done. Workers from Seattle to fast food workers in New York State have organized to win a $15 an hour minimum wage. It’s time for Minneapolis to catch up by passing a $15 minimum wage that includes protections for workers against wage theft.