Wage Theft in the Cleaning of Walgreens? 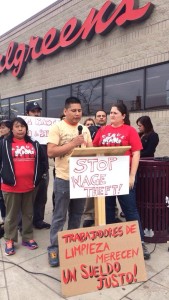 2015 Facing Race Ambassador Award recipient stands with subcontracted janitors who complain of thousands of dollars in unpaid wages for cleaning Walgreens, Office Max and other stores

Minneapolis — This morning, David Jimenez and Dalila Gonzalez stood outside of the Walgreens on Lake Street in South Minneapolis to bring to public light complaints of over $2,500 in unpaid wages at a company that cleans stores throughout the Midwest. A dozen community allies joined workers to deliver a letter to the manager of the Walgreens describing their complaints. Among the participants was CTUL member Lucila Dominguez, who will be recognized this evening with the Ninth Annual Facing Race Ambassador Award from the Saint Paul Foundation for her work organizing with low-wage workers of color for fair wages and working conditions.

According to Jimenez and Gonzalez, they worked for a sub-contracted company cleaning Walgreens, Office Max and other stores throughout the Midwest, sometimes driving as far away as Chicago and having to work up to 18 hour days without receiving their full pay. Walgreens and Office Max contract Kellermeyer Bergenson’s Services (KBS) to clean many of their stores. KBS in turn sub-contracts out the work to Star City Commercial and other companies. Over the past two years, more than 30 employees of KBS sub-contractors have approached CTUL complaining of tens of thousands of dollars in unpaid wages.

“I am here not only to recover the wages that I am owed, but also for all of the other workers who have faced the same problem. In my work, I traveled from store to store doing special cleaning projects. I met other workers who were facing the same issue of wage theft. It is time to end this problem,” said Jimenez.

According to Dominguez, “For years, I worked as a janitor moving from job to job, trying to find a place that treated workers fairly. But at each job, I’d find the same injustices. The reality is that tens of thousands of working Minnesotans, the majority of whom are people of color, have to make impossible decisions every day between paying rent, buying enough food for their families, or taking their sick child to the doctor. So instead of changing jobs, I decided I would join with other low-wage workers of color at CTUL to change the system. While I am honored with the recognition of this Facing Race Ambassador Award, I am constantly angered that it takes so much work just to make sure that workers are paid.”

Dominguez currently leads work at CTUL with workers who face wage theft. Over the past seven and a half years, CTUL has partnered with hundreds of workers to recover over $1.8 million in unpaid wages and damages. Dominguez is also a leader in CTUL’s Campaign for Justice in Retail Cleaning, organizing with retail janitors who work for contracted companies cleaning stores in the Twin Cities metro area. After four years of organizing, and after a year of dialogue between Target Corporation and CTUL members, Target created a Responsible Contractor Policy in the cleaning of its stores in the Twin Cities. This policy opens the door for hundreds of low-wage workers of color to break out of sub-poverty jobs.

“Target has shown that by working together, we can take steps to end racial and economic disparities in our community. We are calling on large retail chains like Walgreens, Best Buy and others, to follow the leadership of workers and Target by creating a Responsible Contractor Policy in the contracted cleaning of their stores,” said Dominguez.

Centro de Trabajadores Unidos en la Lucha (CTUL) is a low-wage worker led organization that is organizing for fair wages, fair working conditions, and a voice in the workplace for all workers in the Twin Cities metro area. www.ctul.net