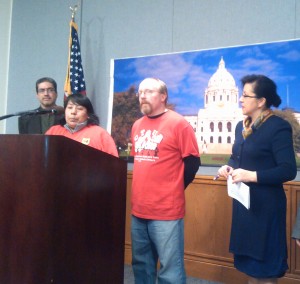 Only two days after the strike led by retail janitors, State Senator Patricia Torres Ray and State Representative Carlos Mariani introduced legislation designed to protect tens of thousands of sub-contracted workers who are underpaid and mistreated. Senator Torres Ray and Representative Mariani stood together with CTUL members to announce the legislation in a press conference at the Capitol this afternoon.

Large retail chains leverage their size to pit dozens of cleaning companies against each other to constantly lower bids. For example, according to a 2005 deposition from a Target executive, Target has a three-tiered competitive bidding system to get cleaning contracts. The industry has become so competitive that sometimes cleaning companies cut corners by violating the law.

Retail janitors who work for contracted companies to clean Target and other stores in the Twin Cities metro area have been organizing for nearly three years to change this reality. During this time, workers have confronted  many issues, including:

In their 2011 Corporate Responsibility Report, Target claims that they “will not knowingly work with any company that does not comply with our ethical standards”, which include:

Workers have led many actions calling for dialogue with cleaning companies, including writing letters, delegations, marches, a 12-day hunger strike, and most recently, after several workers report being intimidated for their organizing efforts, retail janitors led a one-day strike demanding the right to organize without fear of retaliation.

So how have the retail chains that contract the cleaning companies reacted to all of this? After the one-day strike, Target’s statement to press was:

“Target contracts with regional vendors to provide housekeeping services for all our stores and, as such, we do not employ the individuals involved in today’s events. At Target, we are committed to maintaining the highest standards of ethical business practices and we expect our vendors to do the same.”

As workers continue to organize in their workplaces, Minnesota legislators have now taken up the fight in Congress. On Feb. 28, State Senator Patricia Torres Ray and State Representative Carlos Mariani announced legislation designed to protect sub-contracted workers’ rights. This legislation could hold Target and other retail chains that contract out their cleaning accountable in certain situations when cleaning companies violate the law.