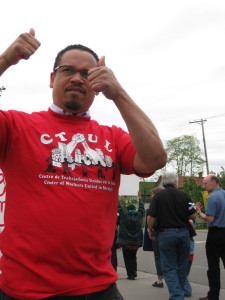 “Today congratulations are due to both CTUL and Target. I applaud Target’s decision to lead the retail industry in responsible sub-contracting practices. I also congratulate CTUL and the workers for having the courage to raise their voices. Today’s victory is a direct result of Minnesotans standing together for better treatment on the job. This policy will give workers a greater voice in achieving the fair pay and health benefits these hard working families deserve.In the last year, we’ve seen workers all over the country organize around the principle that no one working full time in America should live in poverty. I hope other retailers follow Target’s lead and move the industry towards higher wages and better benefits for working Americans.” 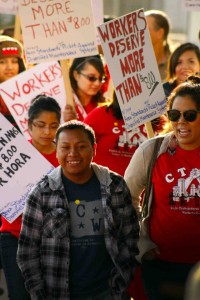 “One of our earliest rallying cries in Immokalee has been, ‘Golpear a uno es golpear a todos’ or ‘An injury to one is an injury to all.’ Over the past several years, members of the CIW and CTUL have stood side by side fighting for basic dignity in the workplace. We have marched countless miles together, we have fasted together, we have picketed together, and we have grown together. And today we celebrate together, as retail janitors at CTUL win this important victory. Today we declare that ‘A victory for one is a victory for all!’” 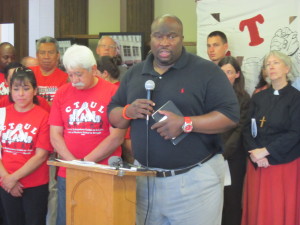 “Over the past two years we have seen workers placed at the forefront of our economy—where they belong. Last year we passed legislation to allow home health care workers and day care workers to unionize. This year we passed the Women’s Economic Security Act to address problems that disproportionately affect women in the workplace. And this year I was proud to author an increase to the minimum wage—the first one in nearly 9 years. And I stand here today, proud to say that we have won another victory for workers’ rights!”

“The nature of work in America has changed fundamentally and forever. Millions of workers are now trapped, as the CTUL workers were, in exploitative low-wage work, at the bottom of chains of subcontractors, suppliers, or temp labor brokers. But CTUL’s victory shows what other brave workers around the country have also proven, from seafood workers facing forced labor on the Walmart supply chain to student guestworkers in a Hershey’s factory in Pennsylvania: when workers defy threats and organize, they can make demands on their real boss, the corporations at the top.” 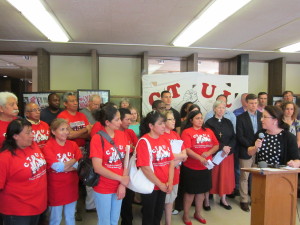 “All of us work together to make life better for everyone.”

“The dirty little secret of 21st century big box retail is that behind so many of our favorite stores—including Target—there is a complex supply chain of labor exploitation.  Workers at the bottom of the chain work for subcontractors who routinely engage in wage theft, forced overtime, dangerous health and safety conditions, sexual harassment and discrimination and interfere with the right to organize, but it is not easy for workers to organize successfully to raise standards unless they are able to reach and persuade the top of the chain to act. This is why CTUL’s landmark victory with Target to accept responsibility for its subcontractors by adopting a Responsible Contractor Policy for all new cleaning contracts in their stores, is a groundbreaking advance.” 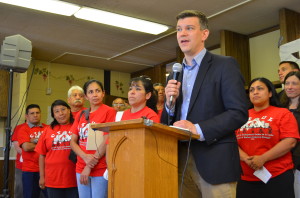 “Nobody should have to work full time and live in poverty. Yet the reality is that our economy is producing far too many low-wage jobs and far too few living-wage jobs. Raising the state minimum wage to $9.50 an hour and tying increases in minimum wage to inflation is a first step towards changing this. Now we need to follow the leadership of low-wage workers such as the members of CTUL who are on the front lines, organizing for a fair economy, and winning important changes. I join the call for other retail stores to follow the leadership of CTUL, retail janitors and Target Corporation by adopting the same Responsible Contractor Policy in the contracted cleaning of their stores.”

“Interfaith Worker Justice congratulates CTUL and its members on their hard earned victory in the campaign for fair wages, benefits and a voice on the job for thousands of retail janitors in the Twin Cities. Like other workers, sub-contracted janitors deserve to have their right to speak up and collectively bargain for better wages and benefits protected and honored. We join CTUL in thanking Target Corporation for taking a leadership role in the retail industry by agreeing to set higher standards for cleaning contracts at their stores, and urge other large retailers to follow Target’s lead.” 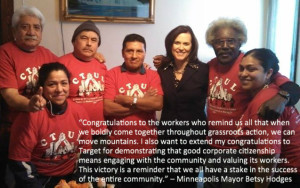 “Congratulations to the workers who remind us all that when we boldly come together throughout grassroots action, we can move mountains. I also want to extend my congratulations to Target for demonstrating that good corporate citizenship means engaging with the community and valuing its workers. This victory is a reminder that we all have a stake in the success of the entire community.”

“We know from our faith that we are all deeply connected to one another. This historic victory of the workers of CTUL is a victory not only for these particular workers, although that would be enough, but this is a tremendous victory for all of us. We know from current leadership at the Minnesota Department of Health that workplace conditions have immediate and important impacts on our collective health: This year when we were fighting for a raise in the wage we learned from MDH that low wage workers die 8 years earlier than high income earners. Workplace policies and practices are stealing years off of our lives.”

“Congratulations to the hard-working janitors at Target stores in Minneapolis-St. Paul. You have set an example and built a model for workers across the country to follow, especially in our country’s enormous retail sector. You have won new protections of your fundamental rights and new safety protections, as well as an end to some of the most exploitative practices in the retail janitorial industry. And perhaps, most importantly, you have won the ability to make these gains permanent by winning the right to collectively bargain with your employers, to sit down as equals and determine both the nature and value of your work. I believe that a new day is breaking in our country, and this victory is among the first rays of a new dawn. This is not just a victory for Minneapolis retail janitors, their families, and their communities. It could also have a far-reaching impact on the future of our country as it will lead to improvements at other Target stores nationally and give new hope to all underpaid workers fighting for justice – whether they are security officers, food-service workers, laundry workers, adjunct professors, healthcare workers, or fast-food workers.”

“For four years, low-wage retail janitors of color in the Twin Cities metro area have fought a courageous battle to achieve better wages, dignity in the workplace and a healthier work environment. After four years of organizing tenacity, including strikes against cleaning company employers, marches and a year of active dialog with Target Corporation, we are proud that they have won such an important victory for workers’ rights. This victory is a testament to the strength of CTUL and their worker leaders for taking on the fight and winning important new standards that will positively shape the lives of retail cleaners and their families.”