Statements of Solidarity from Allies

“Despite the bleakness of national politics, good stuff is happening at the grass roots. For example, today – after a seven-year fight — 600 janitors who clean Target, Macy’s, Best Buys, and other retail giants in Minneapolis and St. Paul have finally won union recognition. It’s the most successful effort to unionize retail store janitors in the United States, and the Twin Cities is the first major metropolitan area in America where retail janitorial workers are unionized industry-wide.

They surmounted hurdles Donald Trump would appreciate — few of the janitors speak English; they’re from many countries, including El Salvador to Somalia; many are undocumented; and many work in isolation and at night. But an immigrant workers’ center – Centro Trabajadores Unidos en Lucha (United Workers Center in Struggle) – slowly began organizing the janitors, undertaking a three-mile protest march, a 12-day hunger strike, two federal class-action lawsuits for unpaid wages, and a series of steadily expanding one-day strikes. The years of work have paid off.

Personal note: One of my former students helped make this happen. I’m proud of him and of other organizers in the Twin Cities. Congratulations, all.

Don’t let the presidential race get you down. The progressive movement continues to build momentum all over the nation.” 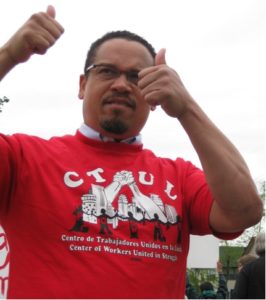 “For the past few years, workers all over the country have organized to demand fair pay and the right to join a union. They’ve been united around a single principle: that nobody working full time should be living in poverty. Today, after years of hard work and solidarity, workers with CTUL have won a critical fight. They stood together and made their voices heard – and they won their right to form a union.

Congratulations to CTUL and every one of the workers who fought with them. I couldn’t be prouder.”

“Minneapolis retail janitors are leading the way and showing that when working people join together we have the power to win. SEIU members are so proud of the janitors who have come together—from multiple workplaces and employers across the entire Minneapolis region—and created the first ever retail janitorial union. With this historic victory, the retail workers will move to negotiate their first-ever union contract with SEIU Local 26. On behalf of SEIU’s two million members, I congratulate them on their perseverance and willingness to think creatively, and look forward to working with them to continue to fight to improve their lives, the lives of their families and their communities.”

“At a time when big employers are using subcontractors and temp agencies to make it harder for workers to organize and improve their conditions, this victory by CTUL is a significant breakthrough. The workers CTUL is organizing represent the future, as more and more industries become subcontracted and the gig economy rises. That’s why this victory gives us a glimpse into the future of worker voice: how, in the new economy, many workers will need to organize to have collective power.”

“Strong unions mean good jobs that help our economy work for the middle-class and those aspiring to be in the middle class. That’s why I’m thrilled that after six years of organizing with CTUL to fight for their rights, Twin Cities retail janitors have won a union.  I’m proud of CTUL and the retail janitors’ efforts, and that Minnesota workers will have a seat at the table to negotiate for safer workplaces, fairer wages, and better benefits.”

“This is a very significant victory for workers rights. I salute the work of CTUL in organizing immigrant workers who need and deserve respect,  better wages and working conditions” 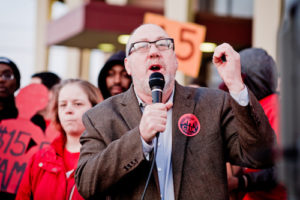 “Congratulations to the workers, who believed that conditions could and must be better for themselves and the colleagues in the retail janitorial industry.  Your power, your passion, and your tenacity has created a national model for supporting retail janitors through the people power of a union.  Congratulations CTUL — your inspiring leadership has produced real results benefitting workers!”

“We are facing a critical moment in the history of the worker’s movement in our communities.  Growing income inequality combined with the rise of the on-demand economy is leaving too many people, especially women and people of color—behind.   Employers take little to no responsibility for the diminishing workplace standards that workers are facing, which is creating a crisis for low-wage and middle-class workers.

However, despite all of this, the very brave retail janitors of CTUL have come together to organize above and beyond what many thought was possible.  This perseverance is a testament to the future of worker’s movement—a movement that the 75,000 unionized members of the Minneapolis Regional Labor Federation believes will continue to grow. While we have long considered CTUL’s janitors a member of the workers movement, we are happy to officially welcome them to the ranks of the organized- a voice that they earned through their hard work.”

“CTUL has much to teach the rest of the country about how to improve low wage sectors like retail that have large immigrant workforces and substandard working conditions.

Up until now, the retail janitorial workforce has been well known for very high rates of wage and hour and health and safety violations and very low rates of unionization. This is a historic breakthrough for workers, worker centers, unions and responsible employers not only in the Twin Cities, but across the United States.

As a result of six years of smart organizing, CTUL has demonstrated that it is possible to move large retailers to accept responsibility for the actions of their subcontractors, adopt a set of standards for responsible cleaning contractors and ultimately, to recognize a union.”

Ken Peterson, Commissioner of the Minnesota Department of Labor and Industry

“We congratulate the parties to today’s agreement. Employees and employers both benefit by coming together to ensure safe and equitable workplaces. The agreement will help make Minnesota’s families and communities stronger.”

Reverend Ann Svennungsen, Bishop of the Minneapolis Area Synod of the Evangelical Lutheran Church in America

“Congratulations to the workers and leaders of Centro de Trabajadores Unidos en Lucha for faithfully working with an on behalf of retail janitorial workers in the Twin Cities as they seek fairness and safety. After six years of determined work, this union vote and the pending contract negotiations mean a new day for retail cleaning workers. The Evangelical Lutheran Church in America in a social statement titled Sufficient, Sustainable Livelihood for All affirms the dignity of work and the responsibility of employers to treat workers with dignity and respect. It also affirms the critical role of organizing in the quest for human dignity and justice.

The work you do is consistent with the commitment of the ELCA to justice in the workplace. Many of the pastors, deacons, and lay leaders of this church have stood with you in work stoppages, a hunger strike, marches, and demonstrations. You have inspired us to become more engaged in our neighborhoods and with our neighbors. Your victory is a victory not only of CTUL and retail janitorial workers; is is also a victory for all our communities.

You have set a benchmark of community expectation for the Twin Cities, as well as for local Worker Centers and labor organizations nationally. Thank you for leading with such passion, grace, and strength.”

“Minnesota’s entire Labor movement congratulates the workers and organizers who have persevered for years in the fight for better wages, working conditions, and a voice at work. CTUL’s efforts show that no matter the industry, working people can improve their lives when they are united in common purpose. We are proud to count CTUL as a Minnesota AFL-CIO affiliate.” 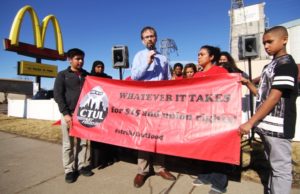 “The victory that we celebrate in Minneapolis today is a tribute to the power of worker centers to engage in deep leadership development and base-building and give working people the resources and tools needed to organize and ultimately unionize.

When CTUL launched this campaign six years ago, they were told that the retail janitor industry would be ‘unorganizable.’ But as we celebrate today’s victory, we can look back on six years of work that has led to hundreds of workers recovering more than $1 million in stolen wages, higher wages across the industry, and mega-retailers like Target, Best Buy, and Macy’s pledging to only work with ethical and responsible cleaning contractors.

Before this campaign began, it was far too easy for cleaning contractors to engage in abusive behavior and a race to the bottom in wages and working conditions. When companies have incentive to mistreat working people as a means to win a contract, our national value of rewarding hard work with opportunity is turned upside-down; our morality forsaken for profit.

The worker center movement is a vital and growing resource for working people and labor, often serving vulnerable communities like undocumented and low-wage workers. While the past thirty years have seen a decline in union membership across the country, particularly in the private sector, the worker center movement is on the front lines organizing working people to fight for what’s right and getting them on the path towards collective bargaining and unionization.

Today’s victory is a testament to the power of this movement to fight for the dignity and justice for all working people.”